Hello all,a really great news for all the android users now you can get rid of all the unwanted calls and texts that disturb you in many situations.True rite “Hello you win a free trip to Paris or hello we are calling from the dialer tunes service may we offer blah..blah..blah or you won a lottery of 1000000 and so on" fed up or tired with all such spam and havoc texts or calls ,so here is the best app to block unwanted calls to purge or shed them out. 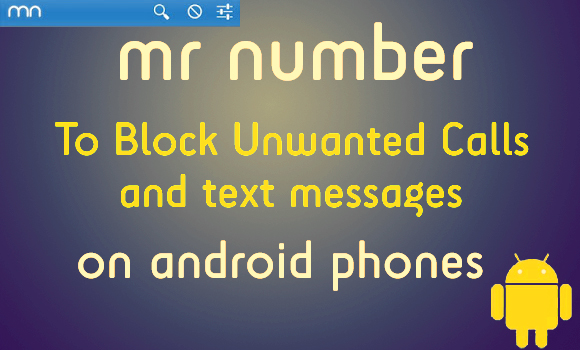 The application is called “Mr.Number"which can answer you question“How to block unwanted calls on android",details of this application are given below. 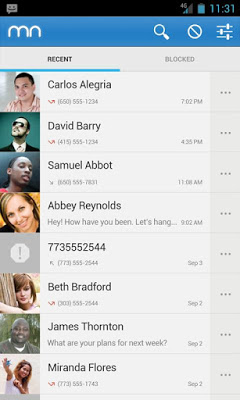 Mr.Number shortly known as mn is one of the most popular and free android app, with four million users which can block calls on android phones.The application allows users to manage phone calls and text messages by organizing their conversations and contacts, identifying unknown numbers and numbers that are important. With this app you can block calls and texts from one person, an area code or the entire world.Let us see the features of this app and How can it Block unwanted calls on android.

Mr.Number is the best app among all the Android Apps to block Calls.

– Block calls and texts from one person, an area code or the entire world.
– Reverse lookup mobile and landline numbers.
– Business Caller ID provides details and deals.
– Stop telemarketers and debt collectors before they waste your time.
– Automatically interrupt calls and texts from private/unknown numbers.
– Report spam calls, SMS, and MMS to warn other users.

1.Block calls and texts from one number or the world:

Mr. Number is the most powerful app for call and text blocking on the market now a days.It Block texts and calls from a person, a business, a prefix, or the world.Add ‘Suspected Spam’ to your block-list and Mr. Number blocks them all automatically.

Here Reverse Lookup gives you more information about mobile numbers and landlines in US. Reverse Lookup numbers that have called or texted you, or enter a number to see if we have a name to go with it. The first 20 Lookups are free,additional Lookups can be purchased through the app (20 for 99 cents).

Business Caller ID provides details and deals When you get a call from a business line, Mr. Number does a free Caller ID lookup to find the matching name. If it knows who called, it’ll display information about the business, including any offers they may have, their location and a link to their website. (You can also block the business from calling you with one tap).