You are here: Home / Computer Tricks / Control Your PC From iPhone Or iPad With Chrome Remote Desktop App

Ever needed to access your PC whilst out? Or need to quickly email yourself a file sat on a hard disk at home? The good news for iPhone and iPad users is that might have just become pretty easy to do – as Google has launched Chrome Remote Desktop for iPhone and iPad, it’s really a great news for iOS user. 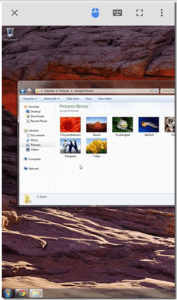 The app is basically a fancier version of VNC – a technology that has existed for literally decades to control other PCs. Chrome Remote Desktop though makes setting up connections easier and the whole process pretty straightforward.

Essentially, all you have to do is install the app on your phone and the corresponding Chrome extension / desktop app on your computer (be it Mac, Windows or even Linux). Once you’ve set up a PIN code and enabled remote access in settings well… that’s it. It just works.

As fitting a whole desktop screen on an iPhone (or even iPad) can be tricky, when viewing in the app you can pinch to zoom, just like when viewing images, and the mouse cursor is controlled by pressing on the screen the direction you want it to travel, and tapping to click. It is surprisingly intuitive, and certainly the best implementation of similar technology I’ve seen.

In addition to allowing access from an iOS device with the new app, Google’s Chrome Remote Desktop feature also allows computer-to-computer access, which Google suggests is useful for securely accessing files on one machine from another or giving a friend temporary access to help solve a computer problem.

Essentially, you can’t really go wrong as it is free – and its certainly worth setting up on your computer just in case.

The app is available for download here on iOS and here on the Chrome store.