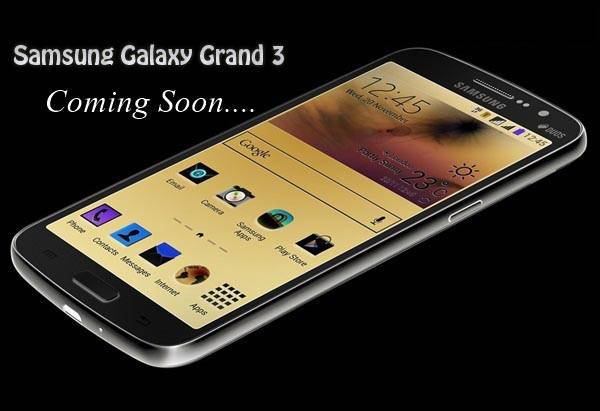 The teaser has a tagline, “The Grandest Ever, Coming Soon.” The partial image of the smartphone in the teaser is in line with the various photo leaks of the Galaxy Grand 3.

The Galaxy Grand 2 was one of Samsung’s best-selling handsets in the first half of 2014, but it remains to be seen if the new model can also be a hot seller (this, of course, will depend on its price).

Leaks suggest Samsung bringing more, following Galaxy A3 and Galaxy A5 smartphones now its time for the 3rd addition of its mid-range phone Galaxy Grand 2. Rumoured to be bearing Samsung Model no. SM-G7200, its Galaxy Grand 3 according to the GFXBench website, without any doubt. Equipped with a stunning 13 megapixel camera, The Samsung Galaxy Grand 3 in comparison with the already existing Galaxy Grand 2, would proved to be a huge technological advancement in terms of the overall features and hardware. The phone also features a High definition 5.0 megapixel front camera for selfies. The newly rumored Galaxy Grand 3 is armed with a HD display of 5.5 inches having 720 x 1280 pixels and supports a pixel density of 267 ppi, which sounds a little less as Galaxy Grand 2 previously had a pixel density of 280 ppi with the same 720p HD display but a slightly smaller screen of 5.25 inches. Additionally The Galaxy Grand 3 also packs an Adreno 306 graphics CPU for a better overall gaming experience. the gadget is running on the latest Android operating system 4.4.4 Kitkat, Samsung packed earlier Galaxy Grand 2 with Quad-core 1.2 GHz Cortex-A7 32 bit processor but this time yes it’s Quad-Core 1.2 GHz but its a Cortex-A7 64 bit processor. No sign of Galaxy A7 still in Pakistan or any information about the prices yet but handsets are rumoured to launch in the china first and then to the rest of the world, same is the case with Galaxy A5. The device will have 1.5GB of RAM along with 12GB of user available space out of 16GB total and will be available in pakistan along with Galaxy A7.