You are here: Home / Computer Tricks / Trick to Stop Autoplay Video in Safari for Mac

Autoplay video is encountered frequently when browsing the web, and many websites will start blasting you with video and sound as soon you load a webpage.

This can be nice for some websites and videos, but it can also be frustrating or unwanted.

A hidden setting in Safari makes disabling autoplay video to be pretty simple on the Mac, so if you would like to stop the autoplaying videos there is an option to do just that. 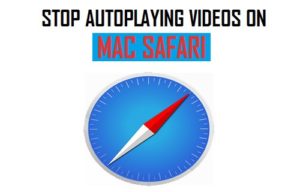 A quick important note: in current versions of Safari (anything before High Sierra) if you choose to stop autoplay video then every video in Safari will require user interaction before it can be played.

You can try out the setting below and see if it works for you, if not then it’s just as easy to disable and go back to the default options of allowing autoplay and inline video again.

Trick to Stop All Autoplay Video in Safari on Mac

By changing this setting which will stop autoplaying videos, all other videos in Safari will require user action before they can be played.

Also Check : Easy Trick To Delete Photos And Videos From iPhone Or iPad

1. Quit out of Safari on the Mac

2. Open the Terminal app in MacOS as found in /Applications/Utilities/

3. Enter the following syntax exactly, this enables the Debug menu in Safari:

4. Hit the return key to execute the defaults command

5. Open Safari on the Mac and pull down the newly enabled “Debug” menu and go to the “Media Flags” submenu, then choose “Disallow inline video”

6. Reload / refresh any existing webpages to have the setting take effect.

You can try it yourself, load any webpage where a video would automatically play and it will no longer do so.

Remember that when you disable “inline video” (and thus, auto-play video) you are actually stopping the ability for Safari to play any web video by default without user interaction.

This means even YouTube videos and Vimeo videos will not load automatically until you click on them to play them. Some users may find this to too cumbersome to deal with and thus will want to re-enable inline video and auto-play video.

If you enabled the prior setting and find it to be too cumbersome to play other videos on the web, simply reverse the change by toggling the menu option again:

1. In Safari, pull down the “Debug” menu and go back to the “Media Flags” submenuChoose “Disallow inline video” again so that it no longer has a checkbox next to it.

2. Refresh any existing open webpages for the change to carry over

Toggling the setting again will allow all web videos to play as usual without an additional step of user interaction, but will also re-allow auto-playing videos on webpages too.

* Safari in MacOS High Sierra 10.13 onward includes an easier to access auto-play video disabling ability. Thus, this tip is most relevant to earlier versions of MacOS and earlier releases of Safari.

Don’t forget to share this article with your friends and if you know any additional tips or tricks on auto-playing videos in Safari on the Mac? Let us know in the comments!