Today, I’ll give you information about top and the best android launchers. Launchers play a very vital role in your android phone. Android phone looks dull without having its customized interface. You can change everything like background, docks, icons, animations etc. There are many android launchers available in the Play Store but I’ll tell you the best ones and those which are popular.

Read the article below:- 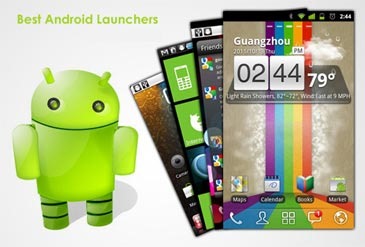 Go Launcher took the top spot on android market and is rated as a best android launcher by its users. It’s simple and intelligent new mobile experience and it can customize the looking and feel of your homescreen in your own way. Go Launcher has many free themes available.You’ll be able to additionally get the paid ones with GetJar gold.. The choice is yours. It gives you a professional and beautiful look which you will love it. It is the top android launcher for home replacement. It is also speedy and has smooth scrolling. Try it and start your journey towards Heaven!

The highly customizable, high performance, home screen replacement app. Nova Launcher is the dazzling customizable launcher for modern Android phones. Nova Launcher replaces your home screen with the one which you customize along with your own hands. Nova launcher includes very attractive layouts, animations etc. It has many free and awesome themes made by a developer named “Photox Designs”. Nova Launcher has its value as the best android launcher. It has a paid version called “Nova Launcher Prime” which has more unlocked features like Gestures, Hide apps, more scroll effects etc. Search its premium apk on Google OR buy it to support developers that would be great. Nova Launcher will keep the animations smooth and letting you use your phone as fast as you can. Well, Try it.

Apex Launcher helps you create a customized homescreen experience on your android phone. It works only on 4.0+ device. It is a very smooth and fast reliable launcher. It has many customized themes made by a same developer “Photox Designs” and it also has its own personal themes. It has powerful scrolling effect. Apex Launcher also got a paid version which has more features. I personally used it for over a year and found it as my best android launcher because of its speed and interface. Search its paid apk on Google OR simply buy it to support developers. Use it and you will love it.

Experience the #1 ranked premium launcher in Google Play Store! A stunning app which has pure dynamic 3D effects. It is the best 3D android launcher ever made. Next Launcher is the most advanced 3D android launcher that has many 3d elements. You can choose between two options either a 3D optimized launcher OR it has also a simple launcher preview. You may upgrade to Full Version to unlock all the premium features of Next Launcher. Search its 3D premium apk on Google OR buy it to support developers. It has millions of users in the World and enjoying it with it’s marvelous effects and preview.

From my point of view, this is the best launcher. Dodol Launcher is only compatible with Android 4.0.3 or later versions (jelly bean,kitkat). It shows a very decent display which attracts the person using it. It has built-in widgets like clean memory, battery percentage indicator which can be used by just a little touch. It’s clean memory feature is just fabulous. You can hide pre-installed apps which you don’t want to use nor see. It has many free themes which are really gorgeous. My opinion is that Dodol Launcher is the best launcher and I’m still using it. It is speedy and worthy. You can also download its themes from Play Store for free. Try it and I’m sure you will like it.

These are the basic information. Get more on Play Store.

Download these launchers from Play Store just by searching them.

If you like this article, then give your comments below for your support!