The iPhone comes preloaded with a variety of ringtone selections. But most users generally want to set up their own custom ringtones. Now, it’s a rather complex process to set up and use custom ringtone on iPhone. If you want to create ringtones from your music library, you would need to copy the music file to your computer, crop and convert it to AAC using iTunes, change its file extension from m4a to m4r and finally sync it back to your iPhone as a ringtone using iTunes. 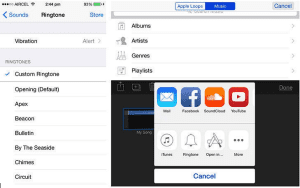 This method is lengthy and especially disappointing as it requires a computer (with iTunes installed) to set custom ringtones, whereas ringtones can directly be set from devices on competitive smartphone platforms (like Android, Windows Phone, etc.). Even though there are ringtone maker apps on the App Store, they usually just create the m4r file for you. And you’d still need a computer with a syncing software (like iTunes) to set it as your custom ringtone.

In this article, we’ll demonstrate how to set up custom ringtones directly from your iPhone, without requiring a computer (PC or Mac).

iOS uses a proprietary format (m4r) for its ringtones, and also does not allow them to be longer than 30 seconds. To set custom ringtones on iPhone, we need an app that can crop music files to adjust their length, save them as m4r and finally export them to the iOS ringtone library.

One such app that allows you to do so is GarageBand. It is one of Apple’s featured apps for iOS and Mac OS X, which is usually used for sound and audio editing. But one of the less known features of GarageBand for iOS is that it allows users to export edited songs as ringtone using the Share menu. GarageBand also provides access to iPhone’s music library, just in case you want to edit songs from your collection. Thus, we can set up custom ringtones on the iPhone by importing songs from the music library into GarageBand, and then exporting them as ringtone from its Share menu.

Note: GarageBand is generally a paid software, but Apple announced that it was going to give away GarageBand for free (along with a host of other apps from Apple) to users who purchase new Macs and iOS devices, since October 2013. So, if you have bought an iPhone within the last year, chances are that you can download GarageBand for free.

The below steps will demonstrate how to import songs from your Music Library into GarageBand, then crop them to a suitable length for ringtone conversion:

Add Ringtone to iPhone without Computer

Now that you have created a custom tone, you can easily set it as ringtone on your iPhone. The below steps will guide you to do so:

Note: By default, iOS allows ringtones to be 30 seconds long at the most. If your custom tone is longer than that duration, iOS will automatically crop the first 30 seconds while exporting.

To choose the newly exported ringtone as your current one, open Settings >> Sounds >> Ringtone and select it among the list of available tones.

The ability to export a song as ringtone can usually be achieved with apps that support importing media from the music library, and which has Ringtone option in the Share menu. As of now, we could find only GarageBand with both these features supported. If you find any other app providing these features, and lets you export music files as ringtones from the music library, do let us know in the comments below.