Everyone loves shooting games, every single person we know. Shooting games are an addiction to be more precise, war , firing, team work, stories, all of these are just, well, love you can say.

Here I am going to list Top 15 Best Android Shooting games for you guys as for some its pure love. 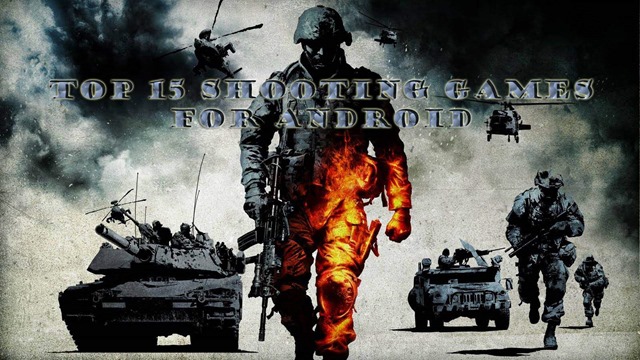 Max Payne series is the most popular series and most played series, and its mobile version is just as amazing as the computer version, indeed, the graphics cannot match those of PCs, but surely they are quiet good as compared to most of the mobile shooting games. The graphics are amazing and the game play is just as decent and good as the PCs version.

Its indeed a perfect shooting games list if Call Of Duty is not listed, Call Of Duty can be called the father of shooting games. Every gamer knows Call of duty and has definitely played its series, if not the full series indeed some of its releases. The madness can now be played on your smartphone, graphics are quiet amazing and so is the game play.

Deer Hunter can probably judged just by its name, anyway here is the explanation. Deer Hunter is a hunting game for those who like hunting game, so if you are seeking for a good hunting game, Deer Hunter 2016 is the game you need. Well, you assume the first person perspective and shoot a bunch of animals. The graphics are good we mean they are not cartoonish as most of the hunting games have.

Fields of Battle is more likely battlefield, and it has all the features a first person shooting game should have such as decent graphics, online multiplayer and much more. In addition, it also offers customization and a lot of more content for you guys to enjoy. Try it, and we can assure you that you will be addicted to it.

Into the Dead combines two very popular genres which are the first person shooter and infinite runner. All the killing and shedding blood is in first person shooter perspective, you play as a character who had escaped the attack of the zombies and now must run for his or her life by bowing down zombies.

In Zombie Gunship, you will be manning on a helicopter as compared to the other zombie games, so literally you will chop/bow them down from the sky. Well the plus point is that it features some really good graphics which looks like a scope which is indeed a very good touch. Basically, you will be providing safety for survivors from above so if they die , you will lose.

This game has two modes, first person sniper contracts along with third person assault contracts which is probably a plus point. The name of your character is Jack Griffin , who is a ultimate contract killer. The game is just awesome, you will have to defuse hidden bombs, and find alternate routes to your target, as well as you have to survive sudden ambushes.

Six Guns is a third person cowboy shooting game. This game contains 40 missions during which you will face different tasks and challenges and is one of the best action / adventure game you will ever seek. While riding your amazing horse, you will take down robbers and your enemies as you play along. The game offers 8 different horses, a wide collection of clothes, and 19 weapons which you will have to unlock.

A regular zombie killing game with amazing graphics and game play. Casual gamers will definitely find it addicting because of its stylish graphics and background music. Well, hardcore gamers won’t like it that much because of shortage of weapons, money can be collected easily and ordinary story but for you casual gamers out there, its just perfect.

Blitz Brigade is the first game ever that brings online multiplayer first person shooter in Android operating system. Victory or defeat, allies or axis, mustard or mayo all is decided in the ultimate FPS showdown Blitz Brigade. The game offers 5 classes which are : Soldier, Medic, Sniper, Gunner, Stealth and has over 100 weapons.

Dead Trigger 2 is an iconic first person shooting game that is also all about mowing down zombies. Dead Trigger 2 has millions of downloads and the and title is so popular. The graphics are very realistic as you will see real time water reflections, enhanced ragdoll physics along with dynamic vegetation.

The fifth release in Modern Combat first person shooter series which comes with even better graphics and gameplay. The game features single player mode as well as multiplayer mode which is literally doubling the fun. In addition, there are four classes :  Assault, Sniper , Recon and Heavy. In single player mode, the creativity is pure and it has been much better since modern combat 4.

Deus Ex : The Fall is set in the same world as Deus Ex : Human Revolution which is a 2011 PC game. Deux Ex : The Fall features hours of action packed game play, fantastic graphics along with some awesome controls and moves. It’s a story of Ben Saxon who is trying to stop a powerful corporation from testing dangerous drugs on the peaceful world/population.

Epoch is a first person shooter game with a decent story line. Basically, in this game you have to shoot from or behind cover featuring some really good graphics along with some realistic game play. The game does not features some old joystick mechanics and its really good for keeping you busy for some time as it has some really good jumping and shooting.

That was the list of Best Android Shooting Games in 2020. For more such lists, keep visiting and subscribe to our mailing list to get such lists delivered directly to your email. Subscription won’t cost you a penny.